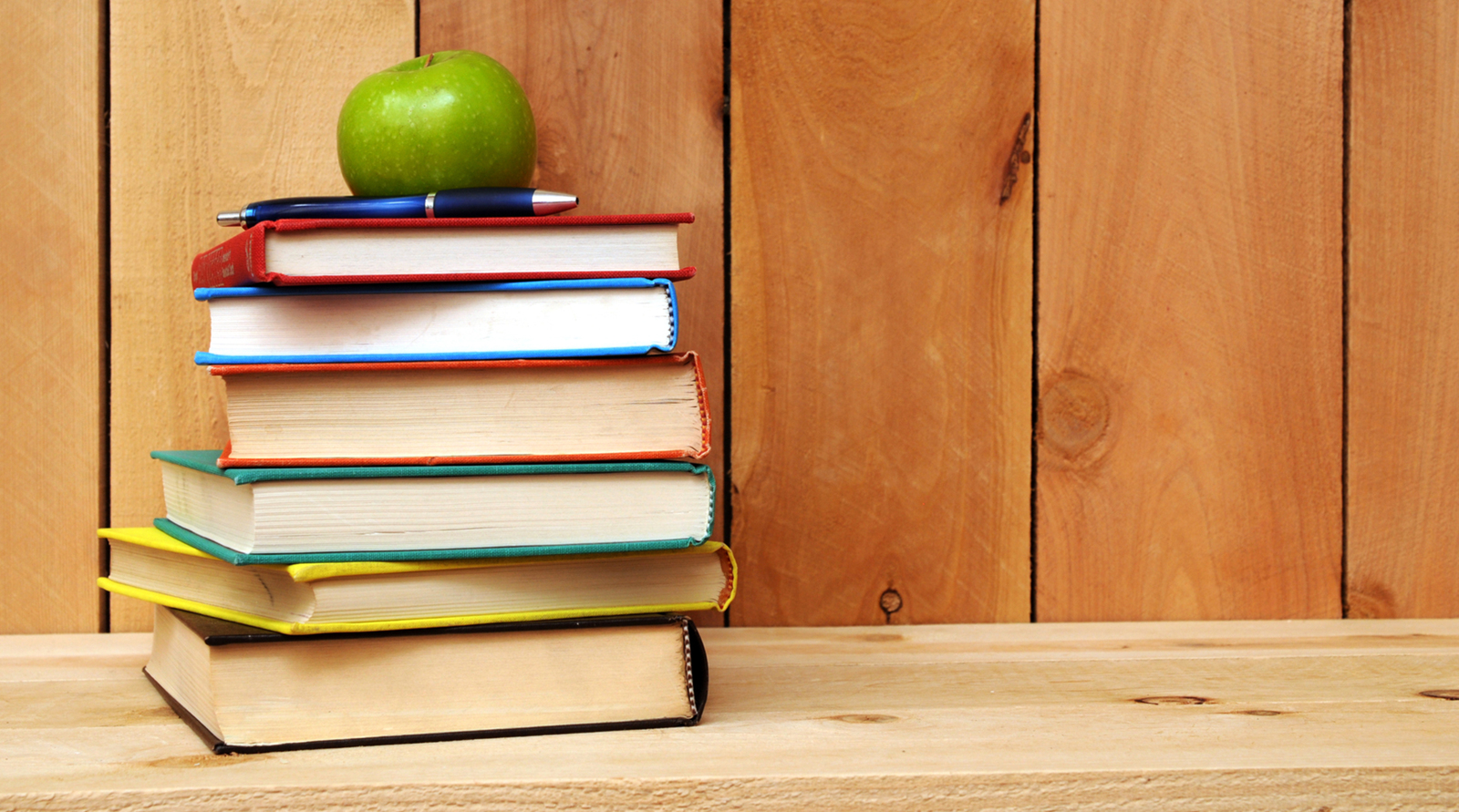 Some Tripods and Bipods flew from planet Zeno.

There were at least two of each of them.

There were 23 legs altogether.

How many Tripods were there?

How many Bipods were there?

Helpful Hint: it might be good to list the times tables or draw some pictures of the Tripods and Bipods to help.

He found a two-digit number less than 50.

What number did Dan find? 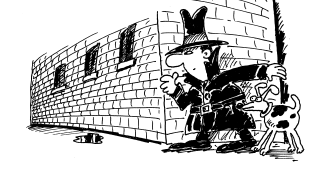 One of its digits was half the other.

The number was greater than 50.

What number did Dan find? 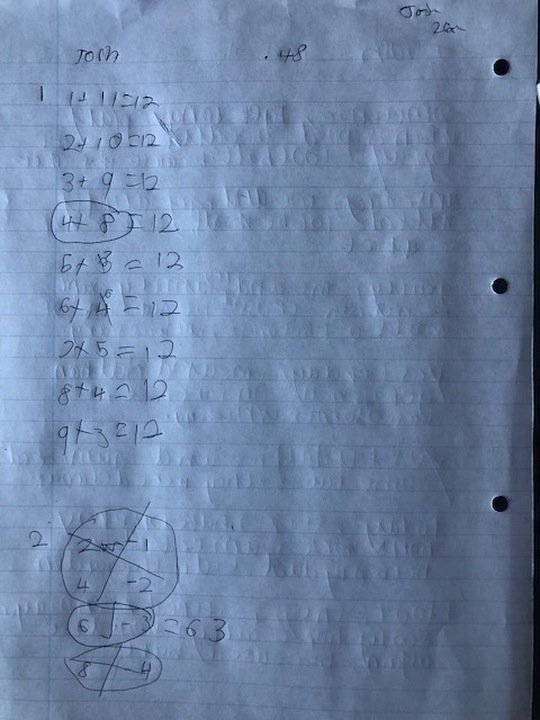 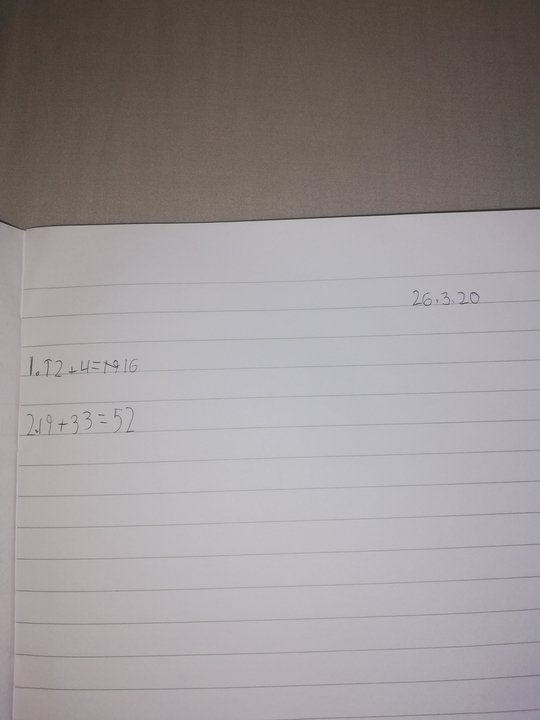 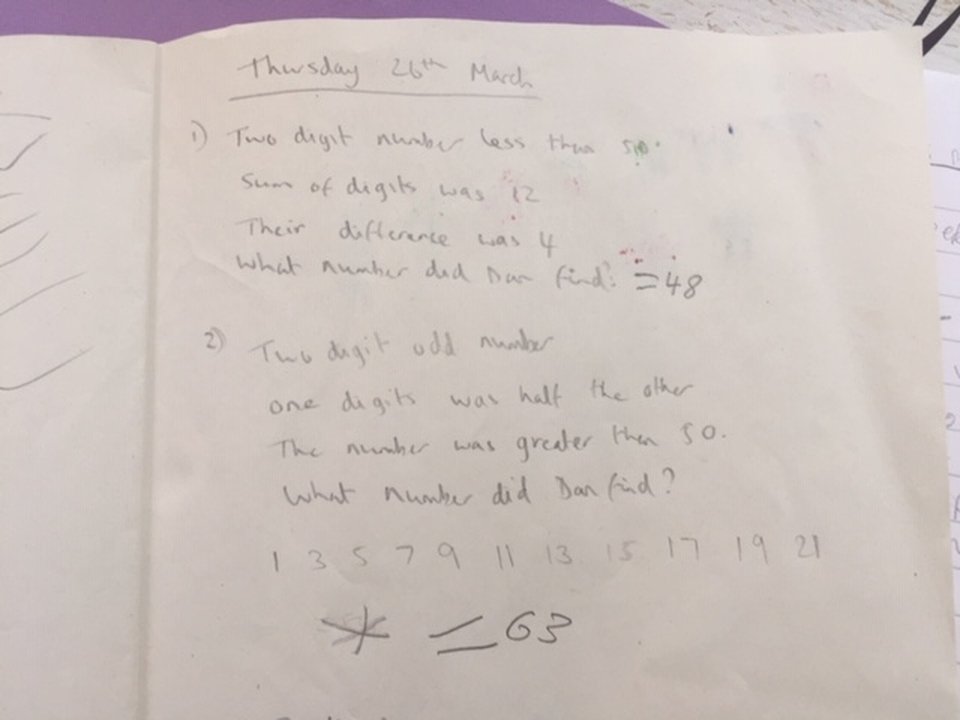 Put them in a row using these clues.

Put them in a row using these clues.

Take a picture of your coins lined up and email them to enquiries@smp.dsat.education

Added challenge, what if you take two 10p coins as well, and between them are four coins.

You could create your own problem with clues to help someone solve it. 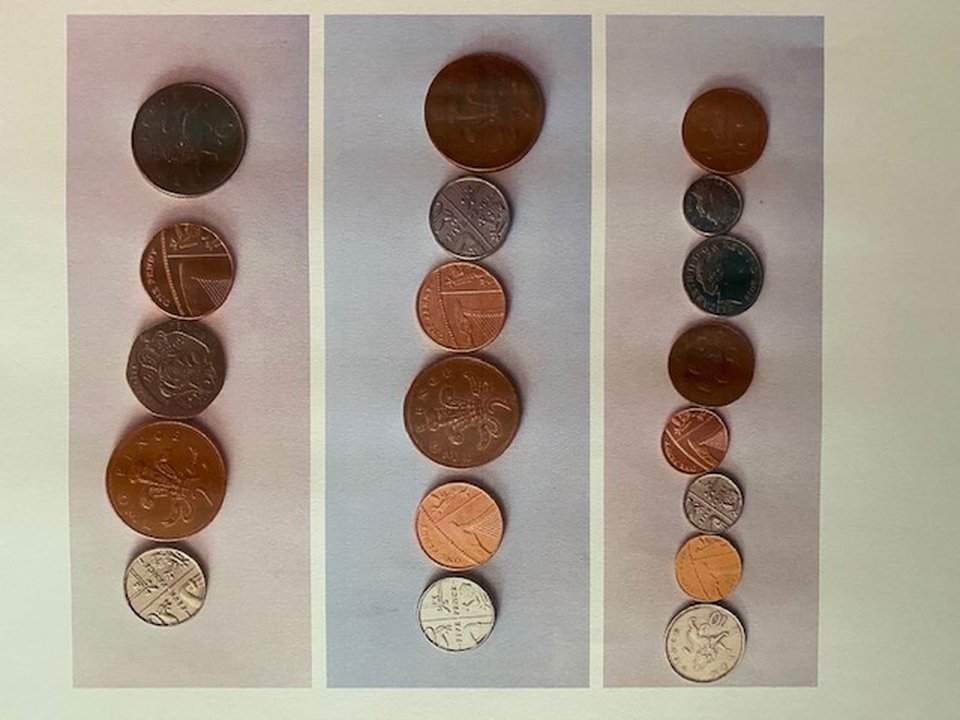 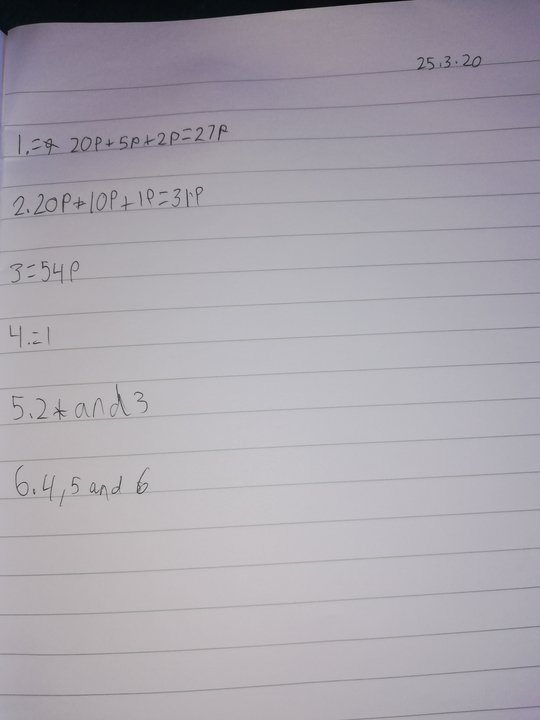 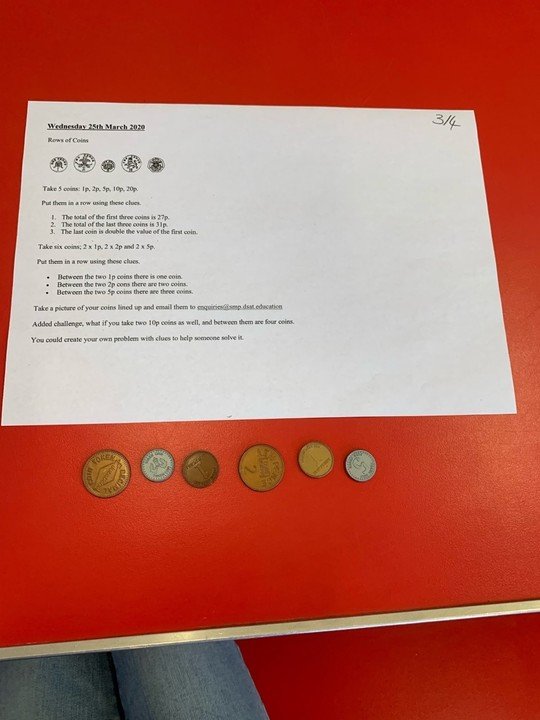 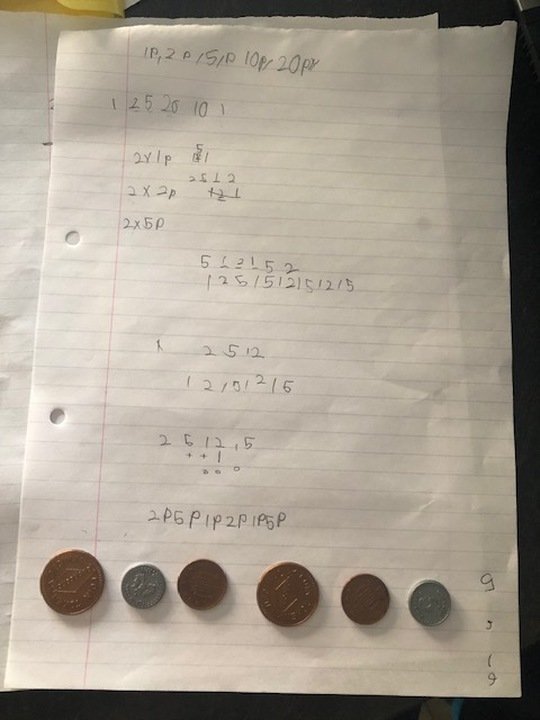 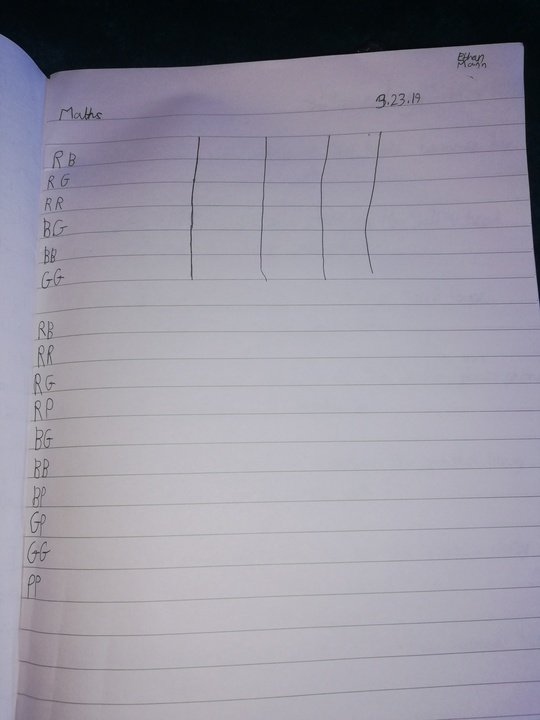 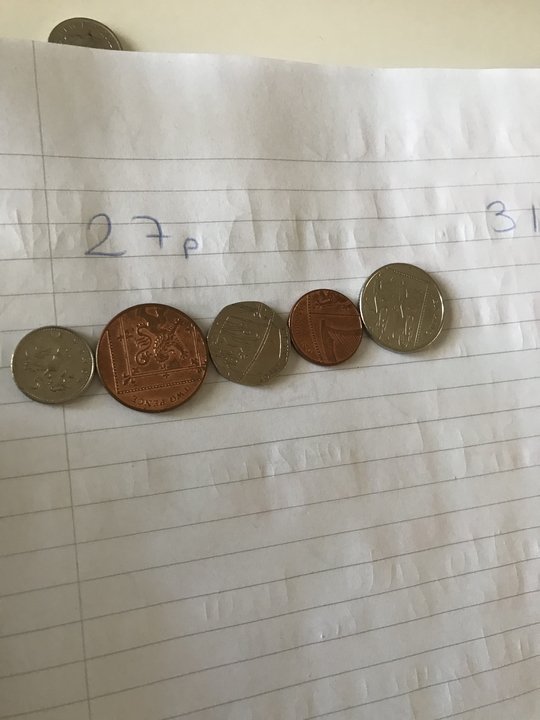 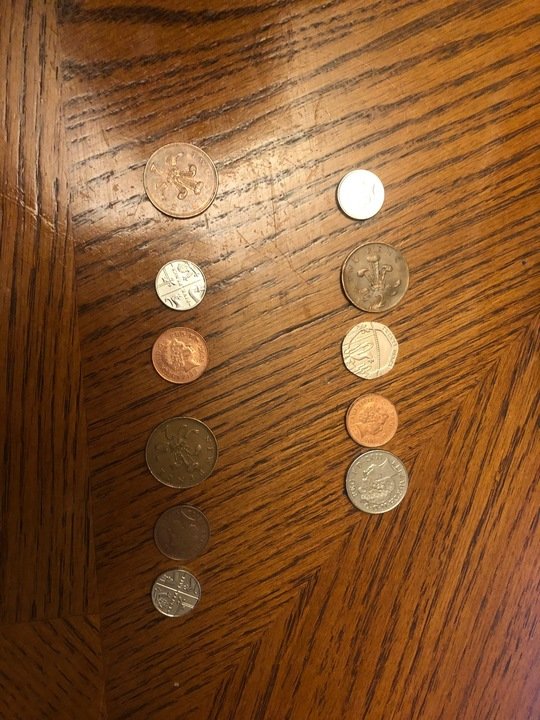 Imagine rolling a 6 sided dice. The score of your dice is the numbers you can see on each side added together.

What could the highest possible score be?

What could the lowest possible score be?

What number would be face down on the table if you scored 17?

Now imagine rolling two dice at the same time. They land separately and do not touch. The score of the dice is 30. What numbers could be face down?

Helpful hint - you could make your own dice by drawing the picture below on a piece of paper and cutting it out and sticking together, then writing the numbers on the side. Alternatively, use a dice from a game you have already. 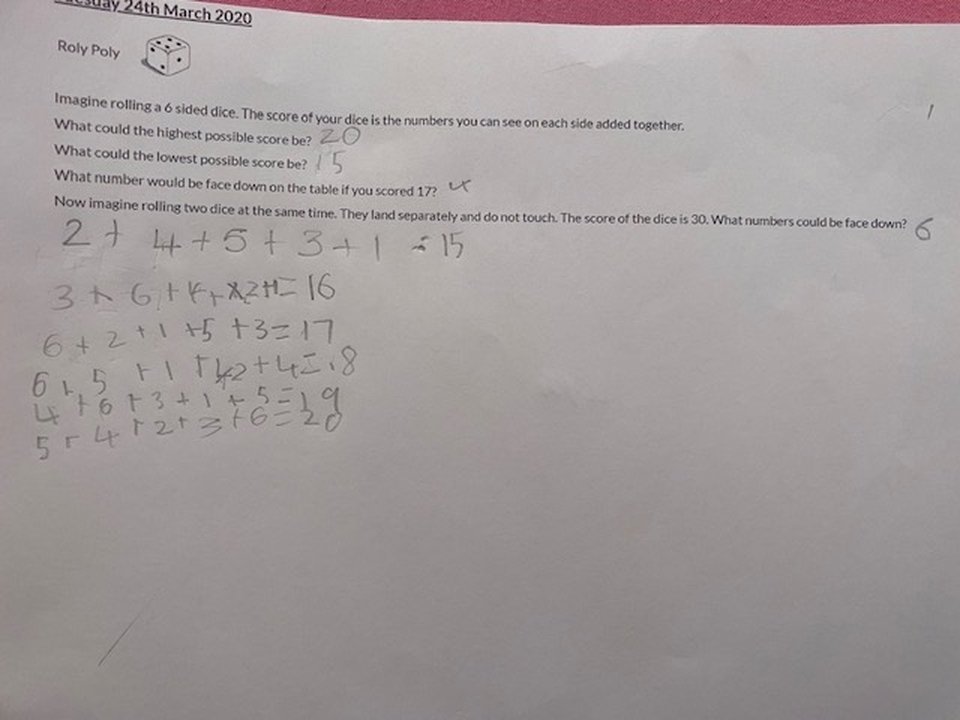 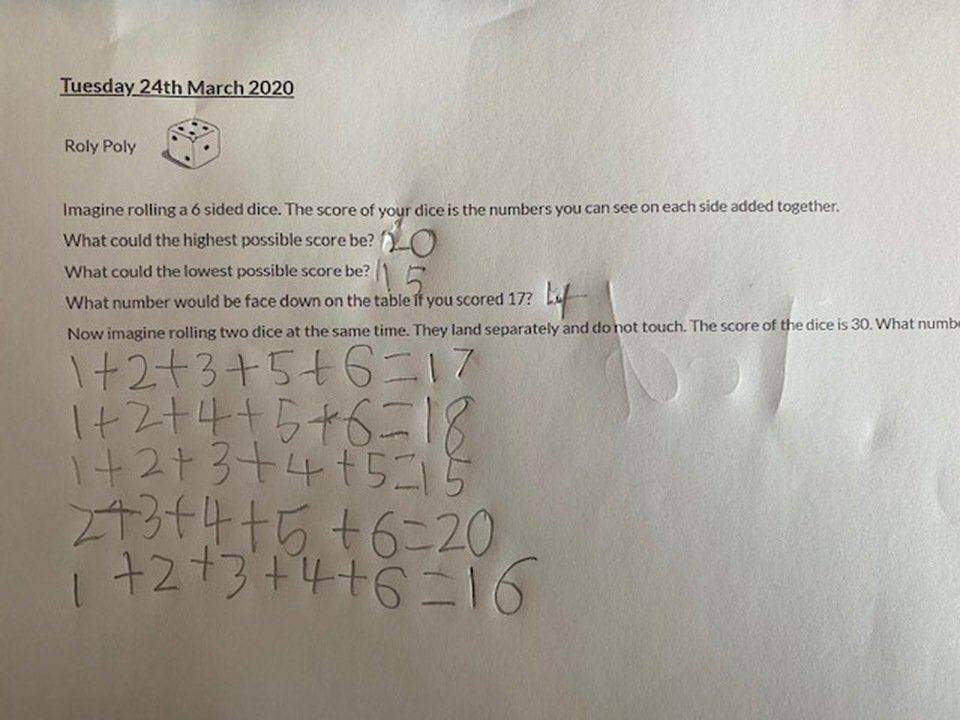 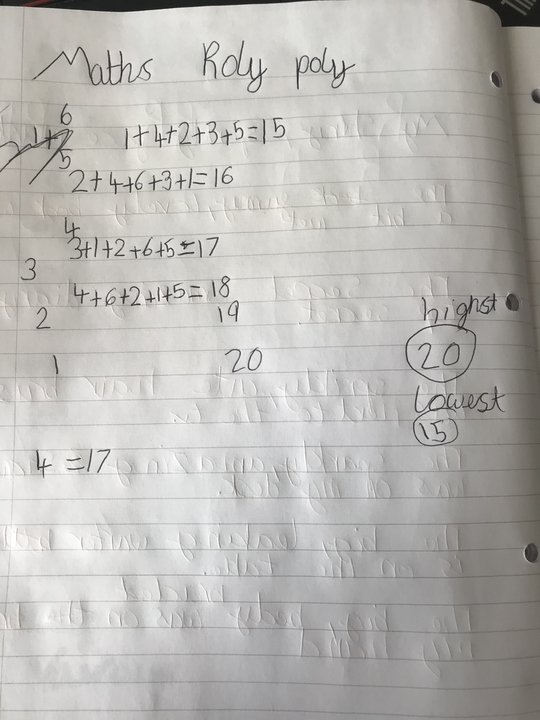 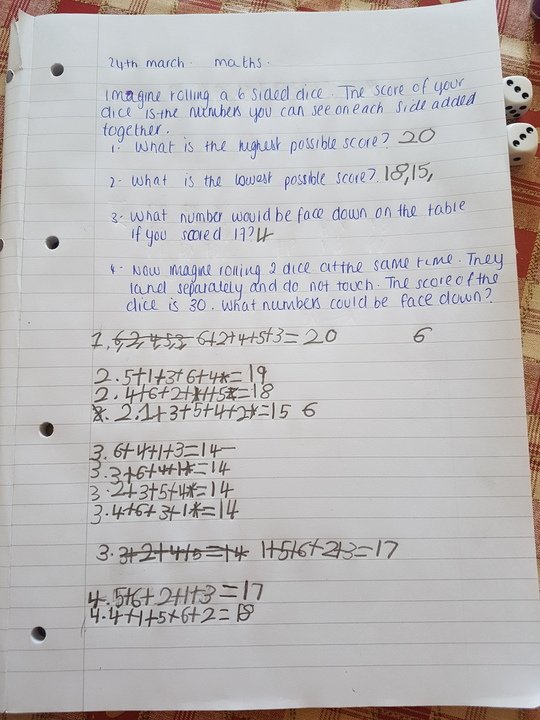 Mr Walker buys 3 new tracksuits in different colours, all the trendiest of course!

Helpful Hint- start with 1 colour and then add another and another! Can you see a pattern?

if you finish, why not add extra colours and predict how many different combinations there are!
You can email a picture to enquiries@smp.dsat.education or send your replies via the guest book below. 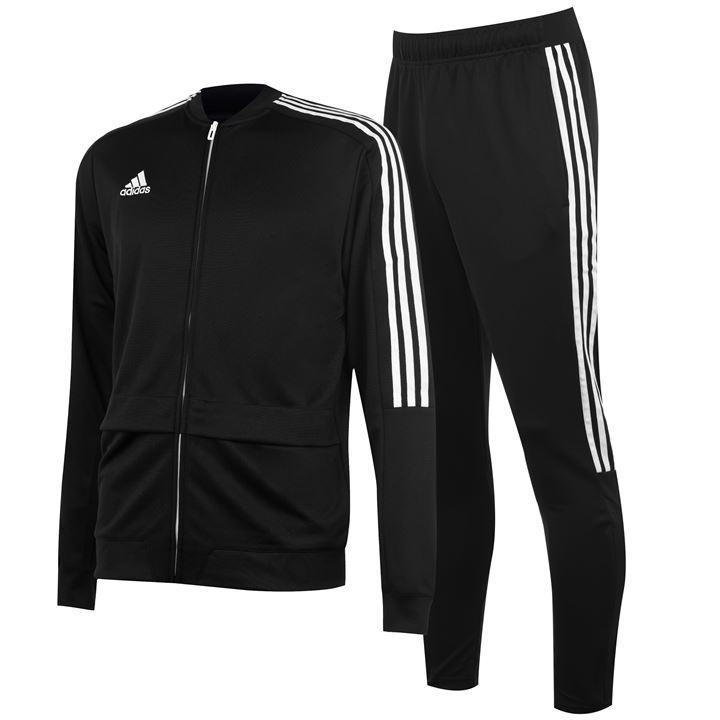 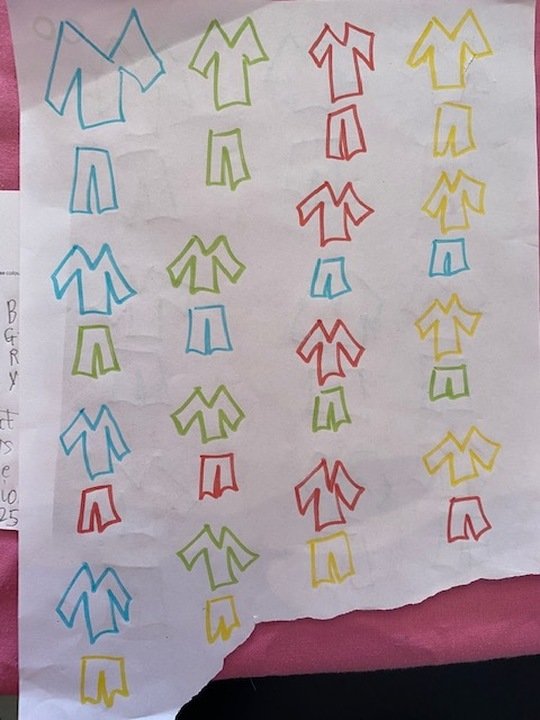 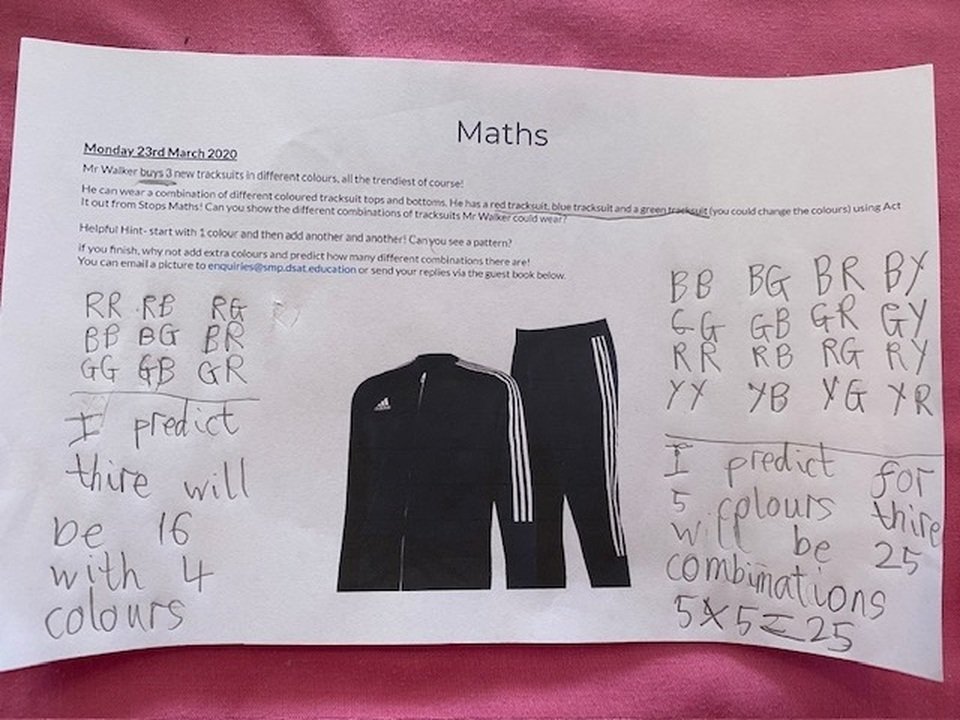 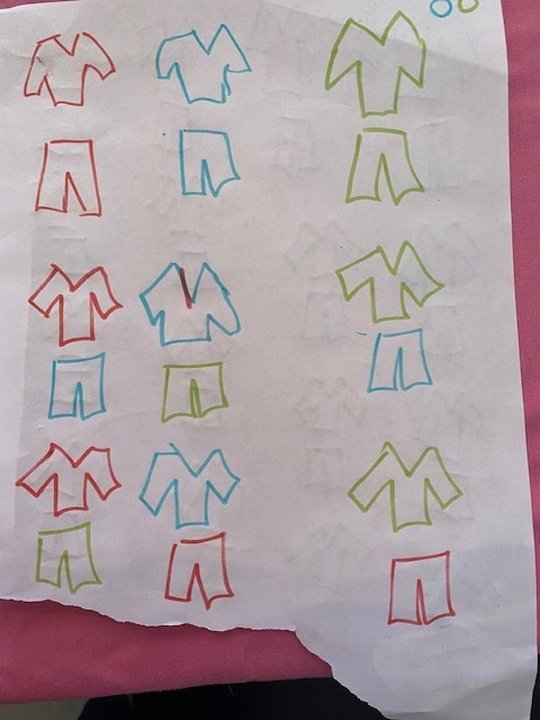 Show Comments
Cavan(about a day ago)

First combination: 5 tripods 4 bipods Second combination: 3 tripods 7 bipods I did find this very tricky at first, but once I drew the aliens it was much easier

Lily rose(about a day ago)

Hi it's hollie there are 5 tripods and 4 bipods

Thomas A-G(a couple of days ago)

cavan(a couple of days ago)

Maisie C(a couple of days ago)

Maisie the detective thinks the numbers are 48 and 63 ???

Lily Rose(a couple of days ago)

Lily Rose(a couple of days ago)

There are nine combinations

Mr Poole(a couple of days ago)

© 2020 Rossington St Michael’s C of E Primary School.
school website, mobile app and podcasts are created using School Jotter, a Webanywhere product. [Administer Site]
We use cookies to provide you with the best experience on our website. Read our Privacy Policy to find out more.